While we all have goals and aspirations for how we envision our lives, a very common notion held by Muslim society have always perceived education and marriage as rivals to each other. Especially when it comes to the women of our community. This unwritten convention has caused quite a controversy, considering that these two life goals are so important to most if not all of us. I would like to explore this further and highlight several reasons why it may be that the question in and of itself has been phrased incorrectly, and why things are changing for the better as more and more people ask themselves some very significant questions.

Does the pursuit of further education hinder marriage? There are many ways to look at this question, and it seems better suited to ask, if the lifelong pursuit of knowledge will hinder a woman’s capability to be a wife? Knowledge, a tenet so valued in Islam, required by every believer, such that our hadith tell us that pursuing it is equivalent to one who struggles in the way of God. Marriage, another beautiful institution in the religion so revered that even one’s prayer weighs more on the scales of Thawaab when married compared to when single. So, I ask the important question: who says that women cannot do both?

This idea has possibly come from the very traditional gender roles that have been carried out by societies dating back very long ago. Islam encourages gender roles as well; however, the rigidity is up to the family unit which then decide for themselves how they will do life together. The virtues of a wife and maintaining her role in the marital relationship are equally important as a husband ensuring he fulfils his role. While Islam mainly required the man to earn provision for his household, today most married couples are both working and providing for the household together, sharing the task- whether that be working outside the home, or working inside the home.

The correlation of delay and decline cannot solely be attributed to education and careers that women have become keener in pursuing, as there are so many other factors, such as having more ability to decide today compared to 50 years ago when women did not earn their own income, where they felt obliged to remain in the home and not pursue careers based on the societal expectations and culture at the time. Also the paradigm shift in the culture where certain generational cycles are being broken, trauma and shame based practices are being recognized and identified as parts of the culture that women will not be carrying forward because there are better ways than to simply believe that higher education and marriage cannot coexist in a healthy way.

It can also be said that the push of women in careers and further studies by society is a way of dismantling the family unit concept. This is done by indirectly making people more individualistic and not valuing the institution of marriage so much due to the pursuit desires of the self which seem more glamorous than a shared life which will often entail compromise. Furthermore, the constant pursuit of self-desires will also create an environment of constantly chasing this world, and forgetting the important provisions of the hereafter, where people now having more and more requirements of the qualities they look for in a potential spouse, and expectations have become so high that marriage is becoming delayed if not done away with entirely.

Today, more of our youth pursue further education and specialisations which can raise the question of how they can find a life partner- and while it may be a harder task, it is not impossible in any way. These conversations should be included when finding a potential spouse. Ultimately, it would depend on the conversations that women are having with said marriage prospects. If both can agree on the pursuit of further studies and can make it work in their lives together, why not? And women who are considering further studies and want to get married should make this part and parcel of the process of getting acquainted to possibly prevent future disagreements or uncertainties around the topic.

Remember that life is a very fluid condition. we can change our minds in the same way the sea constantly carries the sand of the shore to different places each time they meet. People change. A couple who once thought they may not study further, may both decide to do so years after they get married. Those who prioritized studying could change their minds and set out for something different. Having these conversations is important and should be a priority. Consider looking for prospective spouses during your further studies and perhaps talk about an engagement period during the time of study if marriage is not an option while pursuing studies. Or get married and continue studying if that is what works for you.

Striking a balance is key. Understand the importance of both pursuing your dreams and studying to your heart’s content, but also understanding your purpose in life and what direction you would like to take, as well as your goals and values especially as a woman who also wants to get married and have a life partner. Women also play a beautiful role ordained by Allah under the institution of marriage, as a wife. Islam has given certain strengths to women and men for their own unique capabilities to complement each other and learn from one another. Gaining knowledge should be life long and if we are practicing Islam the way it was intended, there should be no issue with pursuing further education as a hindrance to marriage, in fact it adds beauty and honour to a marriage by allowing two individuals to pursue higher levels of thought and in turn can allow for deeply profound insights and possibly lead to introspection and deepen the roots of the marriage, increase love and understanding.

On a final note, we know that women have been predominantly on the receiving end of the pressure in practically everything. Does that mean you conform? On the contrary! You do what makes you happy, you put in your efforts, and you trust in Allah, as he is the best of planners. While there are men out there who may prefer women, who do not wish to study after marriage or study many years before tying the knot, there are just as many men who may also be in the same boat as the women who wish to pursue further studies and want to be married and prefer a woman with a similar mindset. 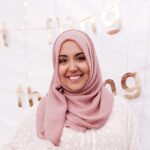 There are very few hard and fast rules when it comes to Muslims and ‘dating’. Many may argue that the two words together are oxymoronic. With Muslim dating apps themselves being a new phenomenon, many are looking for guidance on how to navigate them, which to use and whether they should even be classed as […]

This article seeks to look more closely at Islamic communities in particular in order to assess the extent to which the gender pay gap is prevalent within our communities.

There are many ways to look at this question, and it seems better suited to ask, if the lifelong pursuit of knowledge will hinder a woman’s capability to be a wife?

Get moving! Saima writes on the latest appeal by the Galilee Foundation in support of young Palestinians’ education, and what you can do to take part.

Saima Akhtar reports on UK charity Maa and their successful fundraiser to combat maternal mortality in Bangladesh, and more.

Men should reflect before excluding women from prayer spaces, since they have recently experienced what has been the norm for most Muslim women.