The Partition: An Unresolved Legacy of Communal Hatred

In the scorching hot summer of 1947, as the sun was setting on the British Empire, the sub continent of India was being divided into 2 countries: Pakistan was to become a country for Indian Muslims as demanded by the Muslim League on the basis of the Two Nation Theory and supported by majority of Muslims, while India under the Congress declared herself a secular republic.

It was not the smooth transition that both the colonialists and the colonised might have hoped for. What led to and continued for weeks and months after the British had left, was an frenzy of violence that remains unprecedented in human history.

The twin cities of Lahore and Amritsar, lying just 50 kms apart on either side of the border, would come to symbolise the worst of what went on during that summer of killings and raw, unbridled hatred. As trains would pull into Lahore carrying bodies of dead Muslim men, women and children, dripping in blood, so trains would be pulling into Amritsar with the dead bodies of Hindus and Sikhs fleeing from the Pakistani side. And as those trains arrived, they would fuel yet more anger and hatred. The frenzied mobs would proceed to attack the trains carrying refugees to the other side, and thus continued the cycle of violence well into late autumn of 1947.

Fast forward to February 2020, India has been in the grip of protests against its controversial Citizenship Amendment Bill that excludes illegal Muslim immigrants from becoming Indian citizens, while providing exemptions for other religious minorities. This has come hard on the heels of the Indian government revoking the special status of Jammu & Kashmir (J&K), that had allowed the people of J&K a limited degree of autonomy within the Union of India.

The protests have occasionally turned violent and protesters have been attacked by members and supporters of the ruling party, the ultra-nationalist BJP. In the midst of this fraught and highly charged atmosphere arrives the man who has built his career on the politics of hate, and in particular Islamophobia. I refer, of course, to President Donald Trump.

President Trump and the Indian PM Modi have been great friends and allies ever since Trump took the White House. Their politics have a lot of similarities: They both believe in, and actively promote hardline nationalistic policies. Neither has time for the usual norms of a civilised democracy, their preferred method being to appeal to the base instincts of their most hardcore supporters. Both subscribe to ultra right ideologies (white Christian evangelism in the case of Trump and extreme Hindutva in the case of Modi).  It is this union of ideas and mutual admiration that led to Trump holding the Howdy Modi rally at the huge NRG football stadium in Houston, Texas in September 2019 and Modi returned the favour by inviting the American president to address an equally impressive Namaste Trump rally at the world’s largest cricket stadium in Ahmedabad, Gujarat.

But behind the bonhomie and backslapping, away from the glitz and glamour that was being showcased for the US president, an ugly storm was brewing. As Trump headed to the Presidential Palace in Delhi and took the guard of honour, mobs of BJP-led vigilantes started attacking the mainly Muslim neighbourhoods of North-East Delhi.

There are conflicting reports on what led to the attacks, but just before the rioting started, there had been a highly inflammatory speech by a senior leader of the BJP in which he had threatened to remove people protesting against the Citizenship Law by force if the police failed to do so. In the ensuing clashes a BJP supporter was reportedly killed. What followed were sustained, coordinated attacks on Muslim neighbourhoods. Dozens of people have so far been killed, mosques, businesses and private properties burnt to the ground and people forced out of their homes en-masse.  While the violence, at least for the time being seems to have subsided, simmering tensions remain and the situation remains on a knife edge.

India in 1947 committed itself to secularism under the leadership of the Indian National Congress. The great proponents of that secular ideal, people like Gandhi himself, Jawaharlal Nehru (the first PM of an independent India) and the founders of India’s secular constitution BR Ambedkar and Rajendra Prasad, all had a vision of Indians living in peace and harmony, as Indians first and foremost, with their faith being a private and personal matter, secondary to national identity.

But India as a nation has never quite lived up to that ideal. Tensions between Hindus and Muslims in particular have continued to simmer and bubble under the surface, and on more than one occasion, those tensions have transpired into outright communal violence.

While it is mainly Muslims who have been at the receiving end of the violence, there have been massacres against other communities too; most notably the anti-Sikh riots of 1984 that followed the assassination of PM Indira Gandhi. No accurate figures have ever been given, but an estimated 8000-17000 Sikhs are believed to have lost their lives in the frenzy of killing that followed Mrs Gandhi’s assassination. Christians too have been victims.  In 2016, India was ranked 15th in terms of danger to Christians. On average there were 10 incidents every week of an attack on a church or physical violence against a priest of worshippers.

The persecution of minorities, and in particlar Indian Muslims, has become more pronounced and more violent in nature since the rise of the BJP, a party that set its stall in Indian politics by promoting a hardline version of Hindu nationalism.  The demolition of the Babri Masjid in 1992 by BJP and VHP (Vishwa Hindu Parishad) supporters was a very clear signal of intent. India’s days of secular idealism were to all intents and purposes over. The BJP is now India’s dominant political force. The Indian National Congress, the founders and torchbearers of Indian secularism are reduced to an almost insignificant minority in the Indian parliament.

Pakistan of course has had its own issues with extremism. There have been numerous incidents of violence against both minority Muslim sects as well as non-Muslims. However in the often tumultuous experiments with democracy, the Pakistani electorate by and large has rejected the more extreme elements. That said, the mainstream political discourse in the country does not veer from the ideals of the Two Nation Theory and the unrest in Delhi have further strengthened the proponents of that view.

The Indians, however, find themselves in a rather peculiar dilemma. Their image of a largely tolerant nation where a Muslim could be the head of state and a Parsi general could lead the Indian military to victory against Pakistan in 1971, is now tarnished.  The glue of secularism that kept them together is fast unravelling. The ghosts of Gandhi, Nehru and Ambedkar may still haunt the corridors of power in Delhi, but their legacy is no longer relevant. Instead, it is the rabble rousing rhetoric of the BJP leadership that resonates with the majority of the population. 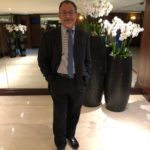 
Aside from running a small business and being a full-time granddad, Anwar occasionally finds time to write on social and political issues. He has written for several websites including Open Democracy, the Sunday Times and Pakistan Times. He has also appeared regularly as a panellist for current affairs on Ahlulbayt TV. Anwar is a great believer in social justice and a society based on tolerance, equality and acceptance. He was active in the UK anti-apartheid movement in the 1980s and 90s, and has also participated in several other campaigns on national and local issues. He remains deeply concerned about the rise of Islamophobia in the UK and the West, and has spoken about this on many forums.

‘’Urdu is not a Muslim nor a Hindu language. It developed out of an honest, genuine, meaningful, creative encounter between Islam and India.”

A number of Asian-owned shops in #Burnley and other parts of #Lancashire were sent letters framed with swastikas.

“Return or go back to your land” the letter warned, threatening shop owners with graphic violence otherwise.

A Tennessee newspaper has been criticised for running a full-page ad that claimed that “Islam is going to detonate a nuclear device” in the city of Nashville.

The Tennessean says that it is investigating how and why the ad was published.

The series has dominated the statistics in Pakistani viewership, but against its surging popularity comes questions about the political and cultural realities that face Pakistan and the Muslim world.