Amid Rising Tension in the Middle East, Muslims in Britain Must Stay United

On 3rd January 2020, a United States drone strike near the Baghdad International Airport led to the death of Iranian major general Qasem Soleimani the head of the Islamic Revolutionary Guard Corps (IRGC) and Deputy Chairman of the Iraqi Popular Mobilisation Units, Abu Mahdi al-Muhandis. Soleimani and al-Muhandis’ assassinations abruptly created tension between the US, Iraq and Iran indicating a possibility of military conflict. It was apparent that the strike was approved by President Donald Trump to disrupt an apparent “imminent attack” and the US Department of Defence put forward a statement indicating that this attack was an act of “defence” to prevent further attacks on American diplomats and military personnel. In contrast, Iran insists that this was indeed an act of war and terrorism.

Iranian leaders swore on revenge while US officials openly stated that they would attack any Iranian-supported groups in Iraq they see as a threat. By 7th January the IRGC retaliated to the assassination by targeting the Ain al-Assad Base, which houses US troops in Iraq. This was considered the second act of infringement of Iraqi sovereignty within a single week, which shows the brittleness of Iraq’s political atmosphere.

It is understandable that with Iraq being caught in the crossfire Iraqis are outraged and have come together to condemn these continued acts of escalations. Furthermore, the assassination of al-Muhandis’, who held an official position in Iraq, was heavily condemned by many Iraqis, who see him as a hero for his efforts in countering ISIS during the 2014-2017 anti-ISIS campaigns. Some groups in the country have even vowed to retaliate and avenge his death.

Between those who celebrated and those who condemned these assassinations, there is also no denying that this may not be the only assassination and there may be more to come. Thus the impact of these escalations can not be understated.

With the new year seeing its first month and everyone vowing to start a new chapter, the year 2020 has already brought a lot of apprehension and fear in the Muslim world.

This is a hot topic of conversation amongst students at colleges and universities whereby there isn’t a single Muslim who does not speak about the security and tension rising in the Middle East. At home, many of these students, see the fear in their parents’ eyes over the security and wellbeing of their extended families in their home countries who may be directly affected by these developments. This has placed further stress on students who discuss this in universities and return home only to worry about their families.

Furthermore, in a recent interview with the Met Police Chief, Cressida Dick, Dick stated that this “worrying time” has placed them on alert to the Iranian and Iraqi community in the UK.

There is no doubt that it is a scary time for many Muslims in the UK.

Between local and international developments, many have become much more anxious regarding the future. However, we as a community must take a minute to think about several things. Yes, international and national developments are bound to affect us; however, we must remember that as a community living here, we must focus on uniting despite our differences. Whether you see Soleimani as a good or bad individual, the repercussions of his assassination will impact us all. Thus, instead of fighting amongst ourselves, we must work together to mend and heal each others wounds.

Amidst these escalating tensions between the US and Iran, we must focus on reconciliation and peace-building, rather than inflaming the ongoing developments through high divisive rhetoric.

Furthermore, we must focus on calling for mediation and de-escalation, as the region has seen its (un)fair share of war and destruction. Instead of concentrating on the specifics of these events and discussing personalities, we must unite our efforts to call for mutual respect, discipline and diplomacy as this is the only formula to develop more sustainable peace in this region.

Yes, many of us are fuelled with emotions and want to find an outlet to release them; however, we must focus these intense feelings on building our futures and seeking to promote peace rather than miserable memes of our “impending doom” if a war begins.

This is our time to show that as a Muslim community living in the west, our shared values and beliefs and our longing for peace and stability can trump the voices banging the drums of war and calling for dis-unity. 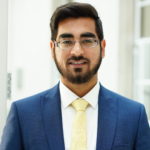 Dawood is a media commentator, blogger, teacher of Islamic Studies, inter-faith advisor, humanitarian and community activist. He has been serving at Al-Hira Cultural and Educational Centre, Luton since 2011 as the Head of Educational and Youth Services. He is regularly invited as a public speaker for conferences and seminars nationally and internationally.

New reports on the coronavirus paint a stark picture for ethnic and religious minorities in the UK, with Muslims found to have the highest deaths.

Activists expressed solidarity with Amani al-Khatahtbeh, New Jersey’s first Muslim woman to run for federal office, after she was targeted with death threats.

It has been found by the NHS that British Muslims are at greater risk of catching the coronavirus and has been hit the hardest compared to other religious groups.

After the uproar of ordering the passengers to leave their planes, Delta were fined $50,000 for violating anti-discrimination laws but they deny discrimination.

Donald Trump, alongside Israeli PM unveiled a divisive Peace Plan on Tuesday. Palestinians did not participate in the plan’s drafting.