Do We Understand the Diversity Within Islam and Christianity?

Christian and Muslim communities are comprised of the two largest faith groups in Britain today. The two aspects I want to explore is understanding the diversity within Christianity and Islam, and intrafaith in the context of interfaith. Christians and Muslims often consider each other to be homogenous, often lacking an understanding of diversity, and differences in creed, theology, spirituality and practice. Understanding religion as a lived reality, as a spectrum often going beyond the liberal-conservative dichotomy. We further need to understand diversity and the intersection of race and faith.

The Church of England is in crisis: facing decline due to an aging congregation, and failing to engage young people who are less likely to follow a religion. Thus the British population identifying as Christian has drastically dropped from 66% to 38%, with regular church attendance being at an all-time low of 5%. As a Muslim living in a Christian country this deeply concerns me, whilst finding congregational Christian prayers for Muslims to accept Jesus as their saviour equally problematic.  The nones have surpassed Christianity, 52% of the population being made up of Agnostics, Atheists, Secularists and Humanists, with only 6% of the population being Muslim. A future reflection is required, exploring Muslim engagement with nones, the need to navigate secular society and institutions who engage Muslims through a lens of race at a time when religious literacy is in decline and institutionalised Islamophobia and anti-religious sentiment is growing. Alarmingly, 63% of the population believe that religion brings conflict than peace – a perception we must become more effective in challenging.

A priority for Muslims in Britain is to foster good relations and demystify the growing misconceptions about Islam. I am often invited to facilitate Unveiling Islam workshops in communities, introducing Islam, Imaan and Ehsan. Islam can be understood through the five pillars: Shahadah-testimony that there is only one God and that the Prophet Muhammad is the final messenger; Salah-the five daily prayer; Zakat-giving 2.5% each year in charity; Sawm-to fast during the month of Ramadan each year; and Hajj-to perform the pilgrimage once during your life. Imaan can be understood as the six articles of faith: the belief in one God; the Angels; the revealed scripture; the Prophets; the final day of judgement; and Qadar-divine decree. Ehsaan is often translated as excellence or spirituality, the purification of the heart through the emphasis ‘That you worship Allah as if you see Him, for if you don’t see Him then truly He sees you.’

Approximately 85% of the global Muslim population are Sunni and 15% Shi’a according to the Council on Foreign Relations, with Indonesia being the home to the largest Muslim population, followed by Pakistan, India, Bangladesh, Egypt, Nigeria, Iran, Turkey, Algeria and Morocco. Three core disciplines – Ilmul Kalam theology, Fiqh Jurisprudence and Tasawuf Sufism – reflect the diversity within Muslim communities. The diversity can be categorised further by the differences based on: religio-political; legal-juristic; theological; and the emphasis on spirituality or rationality. Diversity can be classified into categories of Traditionalism, Scripturalism, Islamism and Modernism. As Islam spread, it took on the cultural, artistic and intellectual norms creating a localised symbiotic relationship with the global Ummah, based on socio-political and economic factors, which has led to the rich Muslim diversity we observe today.

Christianity is equally diverse. Geographically significant populations can be found in Europe, Sub-Saharan Africa, Latin America, Asia-Pacific, North America, the Middle East and North Africa. Church history has been written in volumes, but to give the reader an idea I summarise it very briefly here. The early Church was divided into the Nestorian Churches and Oriental Orthodox. The Great Schism led to the formation of the Eastern Orthodox Church, comprising of Russian and Greek Orthodoxy and several autonomous churches, and the Roman Catholic Church – both of which claimed to be the ‘One True Church’. The Roman Catholic Church devolved to the formation of the old Catholic Church and Anglicanism, and Protestantism was formed after Reformation. The 1900’s saw the growth of Pentecostalism and Charismatic Movements formed from the 1960s.

During the four week introduction to the Christian Muslim Encounters course, our participants often commented that we had our tea and samosas but we had much more. We often observed that Christians and Muslims engage with each other very positively, whilst tensions often raised up between their respective communities elsewhere. The contention is often based on who speaks for their religion. A claim that one group is the most authentic, mainstream or representative voice of the whole is rejected. No single participant is a representative of their entire faith or tradition either – they only represent themselves, their particular tradition and their lived experience.

The Church of England holds authority, political power and institutional privilege. Mainstream Church decline needs to be juxtaposed with Church growth taking place in flourishing minority Christian communities, particularly Eastern European, African, Caribbean, Indian and Pakistani Christian communities. Engaging with this cultural diversity within the Church has been deeply intriguing as a Muslim, particularly when learning about Pakistani Christian diaspora communities found in Pendle and Bradford. Preston is home to a Catholic Cathedral catering for Syro-Malabar Catholics. Preston is also home to a large Indian Christian diaspora from Kerala and South India, which traces their Christian heritage to the disciple Thomas’ ministry in India. I realise however that I need to make a greater effort to engage with African, Caribbean, Eastern European and Orthodox Christians. Interfaith efforts in Britain has often failed to understand and engage these minority communities, struggling to go beyond institutional gatekeepers. I feel this is something which needs to be addressed by Christian Muslim Encounters.

Our next Christian Muslim Encounters webinar on Christian Muslim Diversity is on Thursday 19th November at 12.00-13.30pm – please RSVP here. Watch the recording of last month’s webinar, Why Interfaith? here.

My next reflection on Evangelism, Dawah and Dialogue will be published in the new year, defining evangelism, mission and dawah, as well as exploring:
– How can I as a Muslim better understand my Christian friends, evangelism and mission?
– How do we reconcile the need for Church growth, evangelism and mission with interfaith understanding?
– Can dawah be reframed and reconciled with an interfaith lens or should Muslims prioritise interfaith engagement, building bridges and fostering good relations?
– What does it mean to have an exclusivist belief whilst living in a pluralist society? 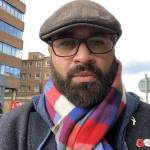 
Ali works to empower communities to create social innovation & change to address problems in society. He has 20 years experience working with communities, the public and private sector. Ali is the founder of Christian Muslim Encounters, which aims to build bridges across communities, academia and policy makers. He is a trustee of Solutions Not Sides, a conflict resolution charity which works in schools to foster critical thinking and peace building. Ali is currently writing a book on interfaith.