“And We have revealed to you, [O Muhammad], the Book in truth, confirming that which preceded it of the Scripture and as a criterion over it. So judge between them by what Allah has revealed and do not follow their inclinations away from what has come to you of the truth. To each of you We prescribed a law and a method. Had Allah willed, He would have made you one nation, but [He intended] to test you in what He has given you; so hasten to [all that is] good. To Allah is your return all together, and He will [then] inform you concerning that over which you used to differ.”

I find it most beautiful that although the Qur’an emphasizes the revelations revealed to Prophet Muhammad (pbuh), Allah still validates the previous religions. He validates not only their message, but their Messengers, and speaks of them most highly.

It is true that as Muslims we believe the present Torah and Bible aren’t the same copies revealed during the time of Prophet Moses and Prophet Jesus (pbut), but even still, there is a very sacred respect about that. I find it heartwarming and unifying.

May we all be guided to the straight path and be true, sincere, and faithful servants to the Most Merciful God. 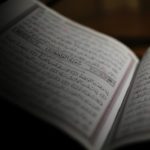 Something About Scripture
Read more

The team behind Tarteel, a new Islamic tech company, envisions a future where Muslims have the opportunity to work towards their success in both this life and the next inshaAllah.