My name is Asma Shuweikh. I am a British born Muslim woman who observes the hijab. I was born in London to parents of Libyan heritage, and am a mother of two children.

You may have come across a video of me that went viral last year in November. I was travelling on the London underground when I noticed a man rushing towards an Othodox Jewish family with 3 young children. He started shouting anti-Semitic and racial abuse towards the family, eventually shifting his focus to the children. He then began to read out from a book, quoting: “they are from the synagogue of Satan,” and that they will become his slaves in the next life.

A few passengers attempted to intervene, but he reacted with threatening violence. At this point, I had heard enough for me to intervene. I calmly explained to him that there are children on the train and that this kind of language, violent behaviour and discrimination is unacceptable. As I attempted to de-escalate the situation and distract him from the family, he shifted his focus on me and attacked me and my Islamic faith. I didn’t react but was just trying to compose him. At the end the family and I left the train and I was left with mixed feelings about this event.

The incident filmed by Mr Chris Attkins, had gone viral on twitter and gave me the chance to appear on various media platforms. This opportunity allowed me to voice my message: that no one should have to live with the fear of being discriminated against due to their religion or racial background. Our society should be one that is free from bigotry and racism.

When I witnessed this ordeal, the first thing that came to mind was the children – and that if I was the parent, I would like someone to intervene on my behalf and support me. After the incident, the father reached out to me and we arranged to meet up. He thanked me for standing up and brought me a lovely bouquet of flowers, and we sat and discussed the event.

In one of his statements, he said:

“We are certain that without her intervention and distraction, he would have continued his abuse which could have escalated to physical violence”.

My faith plays a huge part in my life, and I consider it my moral and religious duty to stand up to injustice of all forms when I see it. It is one of the core teachings of Islam. Our Prophet Muhammad (peace and blessings be upon him) has said:

Having been subject to Islamophobic attacks in the past, I know exactly what it feels like to be at the receiving end of such discrimination. The abuse and racial attacks I have faced personally have pushed me to become ready to defend other people in the face of racial mistreatment, and I urge everyone who witnesses this sort of discrimination to do the same. Every action matters.

For the sake of our future generations, we as a multi-cultural and multi-faith society, must challenge discrimination and prejudice in all its forms. We can respond to the voices that seek to divide us through our everyday actions – by standing up and not remaining passive when we see someone being discriminated against or racially abused.

In the wise words of Ellie Wiesel:

“What hurts the victim most is not the cruelty of the oppressor, but the silence of the bystander”

I firmly believe that we must break down barriers between different communities, integrate more and educate ourselves and others, so that we can tackle the racism and discrimination that’s so rampant in our society. As individuals, we should stand tall and strong regardless of our racial or religious backgrounds. It is truly our uniqueness and differences that make our society and country great. 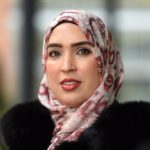 The Hyatt Mosque in London, Canada joined forces with other local mosques to launch the city’s first Muslim-run soup kitchen.

“We want to serve whoever is hungry, whoever needs the food,” said one volunteer.