Coronavirus has impacted us all; many life events were disrupted and life, in general, took an unprecedented turn. Restrictions on movement have been extremely challenging and the loss of lives of loved ones has devested many. But COVID also made us overcome challenges we did not expect or envisage as we started the new decade.

There is a famous saying – “resilience is accepting your new reality” – and this is exactly what we have been through 2020.  With kindness and dignity, we accepted our new ‘normal’ very quickly.  It was inspiring and humbling to see how communities rallied together, supported each other, and grew closer.

When lockdown was first announced in March 2020, I was among many faith and community leaders who worked tirelessly to action new guidelines to ensure everyone’s safety. Mosques and other places of worship were closed, which was something unimaginable. But we did so to preserve life.  Mosques were closed and fasting, congregational praying and Iftars that are a key part of Ramadan were also done behind closed doors, with Eid al-Fitr unable to be properly celebrated. A frustrating and painful time for many, but the protection of human life was the shared priority across the country, and indeed throughout the world.

Muslims were among those on the frontline of the NHS and emergency services, but unfortunately, were also among the first to lose their lives. From various reports, we saw that BAME communities have been disproportionally affected by Coronavirus with 35% 2,000 patients in intensive care units being from black or minority ethnic backgrounds, despite BAME people making up only 14% of the population.

Although we were in lockdown, a lot of positive came out of this. Muslim volunteers give up their time to support their community, for example by delivering food to the NHS workers, foodbanks and those in isolation or offering mosque space to be used by the local hospital. On Sunday 5th July we all joined #ThankYouTogether campaign to say ‘thank you’ to everyone- from carers, frontline workers and helpers, to family and friends- to help us through the first lockdown.

However, even during such unprecedented times, some continued to spread hatred of Muslims. We were warned before Ramadan started that far right groups might exploit concerns around coronavirus to provoke divisions within communities, and this is exactly what they tried to do. The Independent Members of the Government’s Anti-Muslim Hatred Working Group formulated a report highlighting how on social media historical footage of when mosques were still open being used to support claims that Muslims were violating lockdowns and that cases of coronavirus would increase during Ramadan. In the most extreme instances, these claims came with abuse calling for the destruction of mosques. These hateful narratives encourage Islamophobia and threaten to erase the sacrifice of so many on the front line and undermine the significant work of Muslims in supporting the national effort to help those who are vulnerable.

Hope note Hate polling suggests that 17% of Britons think that “British Muslims are keeping mosques open in contravention of the Government’s lockdown rules”, with a further 26% unsure.

This understandably worried and heightened fear among the Muslim community. No one, or one group should be unnecessarily targeted or marginalised. But communities stood together during this time of extreme unease. Communities committed to show those who seek to divide us that we will not turn on each other and instead stand together to get through Coronavirus as safely as possible, as one society.

While this year has been filled with uncertainty as the world has grappled with the impact of the coronavirus pandemic, but one constant has remained with communities pulling together and supporting each other.

As a faith leader while concerned about these tensions and frustrations, communities have pulled together in a way that rarely makes the headlines during times of heightened fear and uncertainty. Joint efforts made be faith & belief leaders as well faith institutions to support the vulnerable have been incredibly inspiring and delivering an important service in society. Faiths United, a coalition of nine major faiths, provided a very useful forum for faith communities during the COVID-19 crisis to discuss how they have been coping with the COVID-19 pandemic, to share best practices, and to drive joint responses.

During the early stages of the first national lockdown, we saw an issue arise surrounding burials for the Muslim and Jewish communities. I was witness to two prominent faiths coming together to overturn a mandate to only cremate loved ones, a tradition not practiced by both faiths. This only happened because of the way faith leaders and community advocates worked together with politicians over a shared common value. More recently, we have seen faith communities push back on communal prayer restrictions, highlighting it as an integral part of service that provides a sense of belonging during difficult and lonely times.

Other initiatives such as the British Churches & Mosques Twinning project by Christian Muslim Forum is also significant. During interfaith week last month, it brought mosque and church leaders together for a series of online conversation sessions between clergy and Imams, as well as lay leaders and volunteers, to foster deeper levels of friendship and understanding.

It is this inbuilt strength and will of the British people that we must celebrate to promote cohesion and respect for our differences. In the post-Brexit Britain, it is then our responsibility as neighbours, faith leaders, activists, politicians, journalists, and communities to ensure we take the right steps towards acceptance of those who are different from us – whether in terms of their views, lifestyle, belief or race. We must celebrate and promote that which binds us together, but equally challenge and debate the issues that may lead to division.

While year 2020 has been the most unprecedented and unpredictable year, from experience, we all have a much deeper appreciation of each other. The death and health issues of loved ones both broke us apart and held us together. 2020 also brought out the best in us: kindness, generosity, resilience, adaptability, service to the nation and sacrifice for the common good.

We learnt that Allah Almighty is ultimately in Charge and He is the best of planners and in Him we need to take refuge. 2020 made us realise it is not wealth but rather health that matters the most. We learnt to value our families and loved ones and not to take anyone or anything for granted.

The spirit of co-operation between governments, companies, scientists and communities around the world also reinforced our belief in ‘togetherness’. As far our relationship with the planet is concerned, we also became more environmentally conscious. A study showed that 2020 had the biggest fall in carbon dioxide emissions since World War II.

As the new year 2021 starts, there are many reasons to be optimistic. The development of vaccines means that next year will bring a dawn of new hopes, God-willing. Allah Almighty promises“Surely there is ease after hardship.” (Qur’an 94:7). Amongst the list of New Year resolutions, let there be resolutions to implement some of the crucial lessons learnt during COVID pandemic, and not to take life and loved ones for granted. 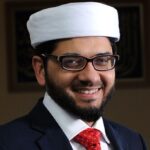 Hygiene is one of the main concepts of belief upon which some of the pillars of Islam are dependent. In Islamic belief, obedience and religious practices revolve around hygiene. The Holy Qur’an and Prophet Muhammad in his teachings, put emphasis on cleanliness and purity as much as religious acts of obedience are accentuated. Cleanliness in […]

We have hit a grim milestone during the pandemic. This week we remember the 100,000 lives lost to COVID-19 & to pray for everyone’s safety from the virus.

“Resilience is accepting your new reality” – Qari Asim reflects on how faith communities responded to a challenging year.

Star footballer and MBE, Marcus Rashford, calls on the Tories to extend the Free School Meals Scheme for the half-term and Christmas holidays. Without the scheme, over a million children could go hungry during the holidays.

The Maidenhead Mosque and Islamic Centre mobilised six months ago to help provide food to vulnerable people following the lockdown.

The decision to base GCSE and A-Level results on mock exams and past grades will disproportionately impact Muslim and minority students. Qais Hussain calls on the government to reconsider its approach.

Only a limited number of residents and citizens of Saudi Arabia were allowed to attend Hajj 2020. British Muslims look forward to attending next year.